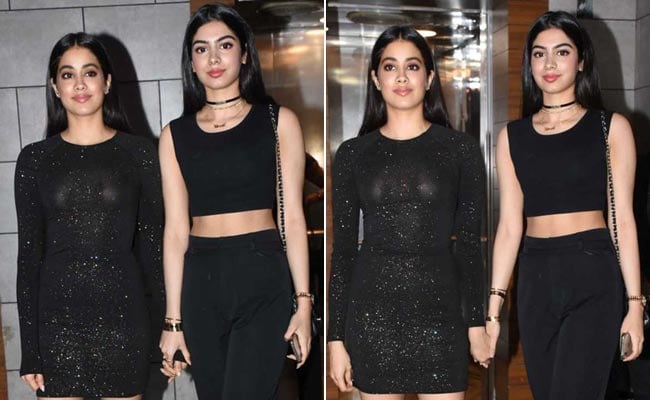 Sridevi and Boney Kapoor’s elder daughter Janhvi Kapoor, recently made her debut into Bollywood with the Dharma Productions film Dhadak. While both protagonists in Dhadak – Janhvi Kapoor and Ishaan Khatter – are Bollywood newbies, the film has managed crossing the 100 crore mark in gross collections worldwide and is being touted as one of 2018’s biggest Bollywood hits so far. Quite impressive for a film with two young actors only just starting out their careers in the movies, don’t you think? Well, we think so – and clearly, this achievement hasn’t gone unnoticed in the eyes of the makers who celebrated the film’s success yesterday.

The success party for Dhadak was held in Mumbai last night. While the film did get mixed reviews from critics and the audience, Janhvi and Ishaan seem to have captured the hearts of a large majority. How else would one explain the film, directed by Shashank Khaitan, recording the highest opening day collection for a film starring newcomers?

The success party was attended by team Dhadak (including producer Karan Johar), but joining the happy team was also Janhvi’s younger sister Khushi Kapoor. Janhvi might be the star of the moment, but both Khushi and Janhvi managed to shine at the bash.

The Kapoor sisters attended the party dressed in black. Janhvi chose to wear a shimmery black bodycon dress with a pair of silver heels. Khushi on the other hand went for a more subdued black crop top and pant set, but she let her pink furry shoes do the talking. They both looked absolutely fabulous – and we love how they’re posing holding hands.

Also dressed partially in black was the other star of the moment, Ishaan Khatter. Ishaan’s choice of ensemble was much more toned down and casual in comparison to the girls (duh). The 22 year-old went for a black t-shirt, jeans and a pair of sneakers.

Ishaan looks great, but capturing our hearts with their style choices at the moment are definitely the Kapoor sisters. 10/10 for always looking uber chic and being the trendiest in town.