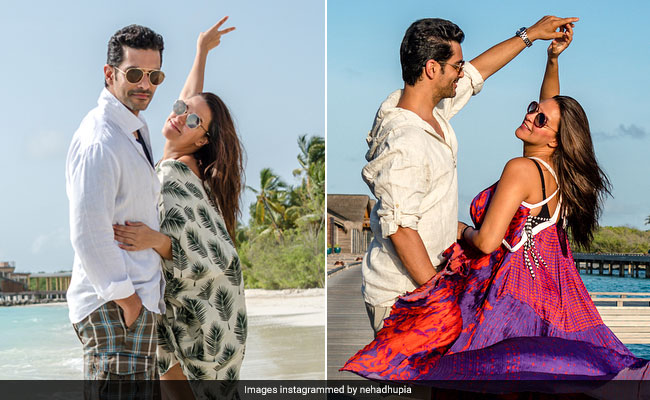 Neha Dhupia and Angad Bedi announced yesterday that they’re expecting their first baby together. Neha and Angad shared this happy news with the world by sharing a few adorable pictures of a visibly pregnant Neha on Instagram. Neha Dhupia may have only just made the news of her pregnancy official with these posts, but her sartorial choices of late have been the ultimate in terms of pregnancy style and comfort. Neha’s style choices and strategic hiding of her tummy in her recent pictures has had fans speculating her pregnancy for a while now. But that seems to have left Neha, who has continued to dress and post pictures exactly as she wants, unfazed.

Here’s the picture Neha and Angad posted to announce their pregnancy.

Neha and Angad were, until very recently, holidaying in the Maldives. Neha shared a bunch of pictures from what some are calling their delayed honeymoon. In most pictures shared from their holiday, Neha appears to be hiding her pregnancy bump not just by wearing free-flowing dresses, but also by sometimes placing a bag (or sometimes just her husband) in front of her stomach. This was also pointed out by many of Neha’s fans who seemed to notice this pattern in her pictures.

Here are a few comments left by Neha’s followers on her Instagram pictures, before her official pregnancy announcement.

Either way, Neha looks stylish and rather lovely – even though we can’t see all of her outfit in most pictures from her holiday in the Maldives.

Neha looks relaxed and cool in this palm print kaftan from Payal Singhal, at the beach.

We love that Neha chose to wear this bright red lace detail dress in complete contrast to her husband who wore white, and also covered her bump.

This floral and bandhani print maxi summer dress from Saaksha & Kinni is perhaps one of our favourites. All the extra fabric in this dress does the magic for Neha and her bump this time.

Once again, the bag does the trick for Neha who looks quite lovely in this blue Hemant & Nandita number.

Back in Mumbai, Neha in this yellow and white maxi dress from Payal Khandwala, looks absolutely resplendent. We’re not sure if it’s the colour or the pregnancy that’s contributing more to Neha’s unmatched glow.

For an event in Bangalore a few days ago, Neha chose to wear a shimmery black maxi dress from Gaurav Gupta. The gathered fabric and silhouette made Neha’s bump almost invisible.

Yesterday, a few hours before the pregnancy announcement, Neha attended an event in Delhi wearing a loose fitted black shirt dress with a pair of black boots.

Hiding her baby bump or not, Neha looks fantastic. Many congratulations to Neha and Angad for their ‘new beginning’.