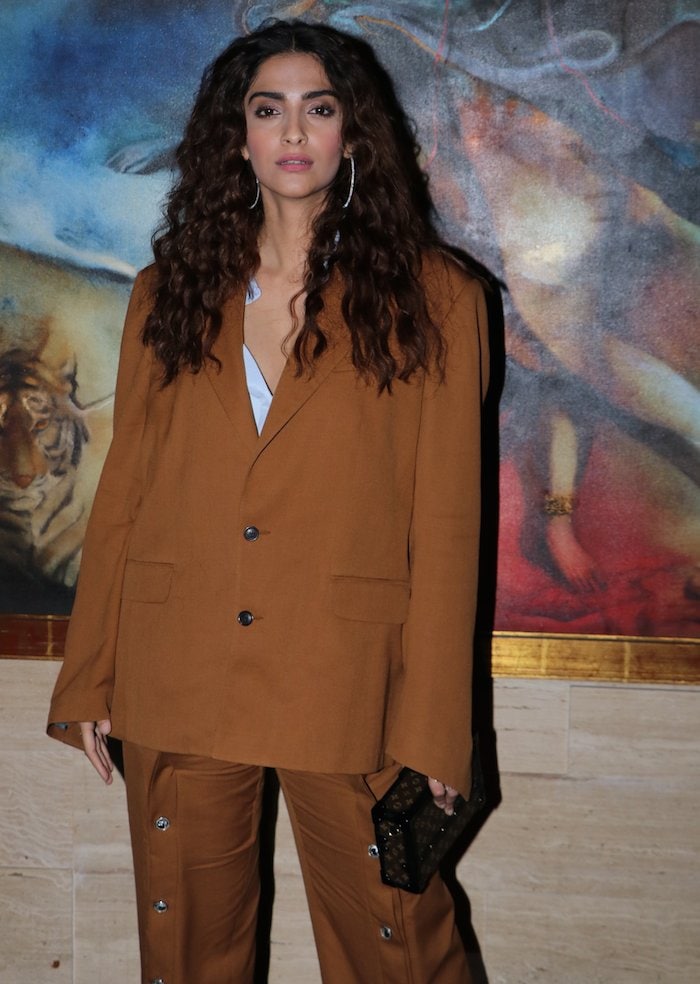 It has long been established that Sonam Kapoor’s style, eye for trends and sense of fashion is inimitable. The reigning fashionista of the Hindi film industry, Sonam Kapoor, rarely ever disappoints when it comes to her sartorial choices. Whether she’s walking down a runway, making a red carpet appearance, attending an event or simply walking in or out of an airport – there’s just no competing with the Aisha star in the style department. Sonam is constantly experimenting and seems unafraid to try new or unusual things when it comes to the way she dresses.

Most recently, Sonam set the fashion bar higher (yes, even higher) by acing androgynous fashion. Last night Sonam attended the 3rd edition of Jio MAMI’s Word to Screen Market welcome dinner, wearing a brown pantsuit. It wasn’t just an ordinary pant suit, though. Sonam’s suit from Y/Project featured an oversized blazer and flared button up pants. Sonam wore a barely visible blue shirt under her blazer. She teamed the outfit with a large pair of hoop earrings and a Louis Vuitton box clutch.Her avant-garde suit wasn’t the only thing that managed to make Sonam look ultra chic and different. There was more than just her clothes that added an extra oomph to Sonam last night – it was her brand new hair. Sonam Kapoor, with her naturally sleek and straight hair has always managed to look rather elegant and graceful – but what we saw last night was a head full of curly locks. Sonam has (reportedly) resigned to this temporary perm for her role in her next film, The Zoya Factor. We think it’s definitely a look for the books, what with Sonam looking so suave and fashionable.

We’re absolutely taking inspiration from Sonam on how to ace the androgyny trend – and most definitely on how to rock curly hair.