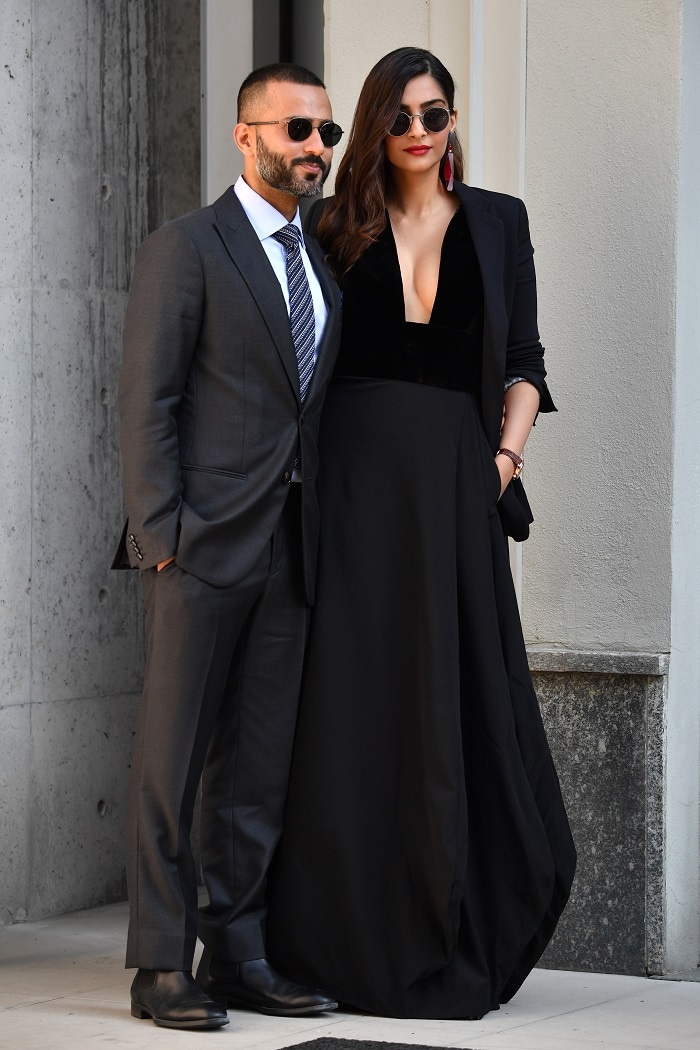 Sonam Kapoor’s sense of style and fashion is incomparable. Rarely has the actress disappointed us with the fashion statements she makes and the trends she sets. And by the looks of it, her partner for life is now also her partner-in-crime when it comes to setting fashion goals. Sonam’s wedding with Anand Ahuja was quite a ride for the fashion savvy people. Everything from Sonam wearing a quirky lehenga to Anand wearing sneakers with his suit, the two made sure they set some new fashion trends rolling. And now they are back to being their stylish power couple selves.

Yesterday, Sonam and Anand were seen at the Milan Fashion Week looking their dapper best. There for the Giorgio Armani show, Sonam and Anand were surely the couple to behold. Sonam raised the style bar quite high with her black Giorgio Armani outfit. The velvet deep-neck top with black skirt and jacket, paired with round black glasses, gave us some serious vintage vibes. Not only did the outfit look chic but also quite elegant. Anand, on the other hand, wore a Giorgio Armani grey suit which complemented Sonam’s outfit and allowed it to be the centre of the limelight.

This was twice in a week that Sonam and Ahuja gave us major style goals together. A couple of days back at Lake Como for Isha Ambani’s engagement to Anand Piramal, Sonam and Anand looked suave in their Indian ethnic outfits. While Sonam wore an exquisite Abu Jani Sandeep Khosla suit with intricate embroidery, Anand wore a simple black and white sherwani. Taking a boat ride in Lake Como, the two looked picture perfect.

Well, it has certainly been a very stylish week for Mr and Mrs Ahuja. From desi to dressy, their complementary outfits were just another reminder of their synergy as a couple. And with the festive season around the corner, here’s hoping for more glamorous looks from the two. After all, it will be their first festive season post the wedding.