Pearls might be the most unexpected accessory to have been embraced by music’s best-dressed bad boys. Just last week, Maluma wore a fetching strand by Chanel. Harry Styles has long stood by the ladylike jewelry, too; ditto for A$AP Rocky and Lil Nas. Now, jewelry designer Presley Oldham is challenging the gender norms around pearls with his namesake label for men. For Oldham, the idea was born out of a personal need. “I had not seen a linked pearl chain in the way that I wanted it, so I made one,” he says quite simply. 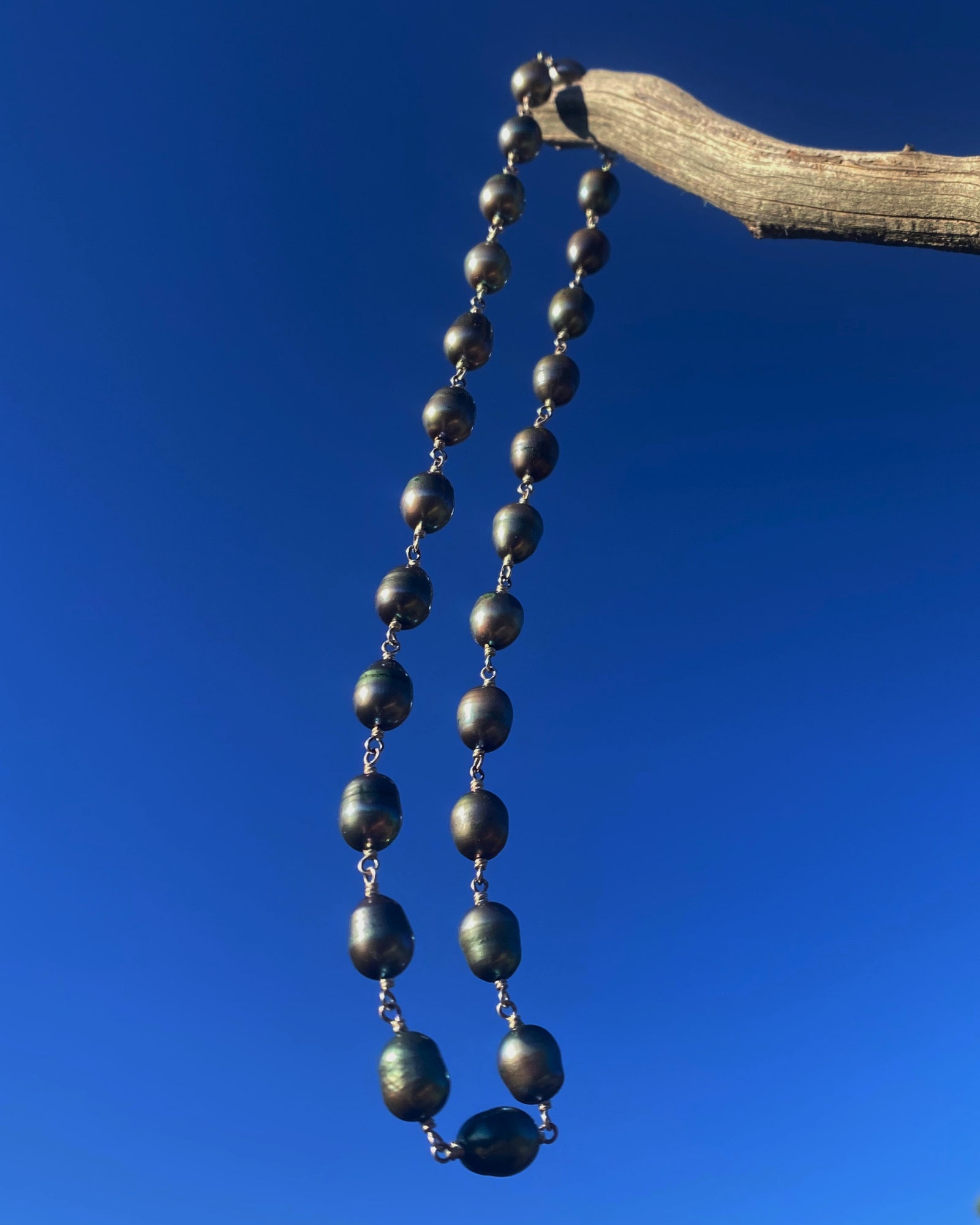 To fashion diehards, Presley’s last name will sound familiar—yes, he is the nephew of ’90s fashion stalwart, Todd Oldham. As you might expect, Presley practically grew up in the industry; his father, Todd’s brother, was responsible for the brand’s hardware, including the designer’s idiosyncratic buttons. Ironically enough, Oldham, 24, hadn’t planned to follow in his family’s footsteps. Up until very recently, he had been pursuing a career in acting which was his major at New York University. And yet, his innate sense for the quirky and the crafty pulled him back to fashion.

Oldham started making jewelry with his grandmother as a child and continued the hobby into his adult years. Unable to attend auditions amid the pandemic, he took up the craft again, creating his first pearl necklace back in March while under lockdown at his grandparents in Santa Fe. With deliciously tongue-in-cheek names such as “Rice Crispies” and “Black Beans” to reflect their irregular shapes, the freshwater pearl chokers quickly became popular with friends. It wasn’t long before he’d officially launched his own jewelry line.

While Oldham cites ’60s fashion icon Paco Rabanne and Ann Demeulemeester’s minimalist designs of the ’80s and ’90s as references for the label’s chain mesh hardware, he notes that his uncle was his first great mentor. Oldham worked in his uncle’s archive while he was in college at New York University, and helped to prepare the designer’s retrospective at the Rhode Island School of Design in 2016. “That was a world of education for me. It was just me in a 12 foot by 12 foot room alone with 10 years plus of clothing,” says Oldham. “The prints and everything were already part of my lexicon. That is what my baby blankets and nightgowns were made of.” (Fun fact: It’s not Oldham’s first time in Vogue, either. He appeared as a three-month-old in the June 1995 issue of the magazine as an “accessory baby,” wearing a snake-and-tiger print outfit made from offcuts from his uncle’s Todd Oldham studio.)

Oldham has adopted a similar zero-waste mindset for his own line almost by happenstance. He has been sourcing antique pearls at flea markets in New York and Los Angeles for years, amassing an extensive collection long before the line was even conceived. “It is about finding a way to do it without putting more junk into the world,” he says. “It is pearl and silver, so there is no plastic and there is no junk. It is from the earth and in a certain way, it is elemental.”

In the age of social distancing, it only makes sense that Oldham would model the look book himself. Turns out he’s also his brand’s best poster child, with an approach to style that he describes as part ’70s—hence the simple white tee—with Texan touches including cowboy boots. With his shoulder-length hair and gentle good looks, Oldham admits his look is a bit androgynous. While the pearl necklaces have primarily found an audience with men, he considers the collection to be gender neutral. Says Presley, “Anyone can pick it up and feel elevated which is the joy of it.”